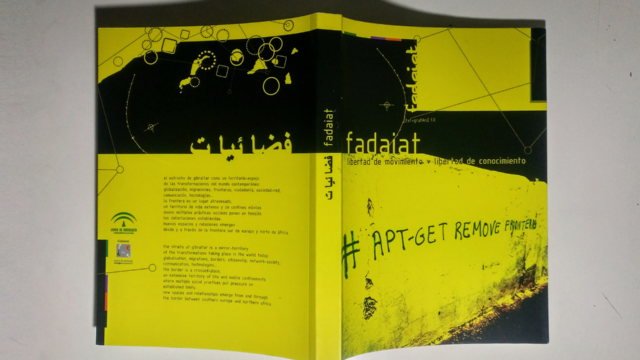 The straits of Gibraltar is a mirror-territory of the transformations taking place in the world today: globalisation, migrations, borders, citizenship, network-society, communication, technologies… the border is a crossed-place, an extensive territory of life and mobile confinements where multiple social practices put pressure on established limits. new spaces and relationships emerge from and through the border between southern Europe and northern Africa.

the book and all it entails plays an important and irreplaceable role, but it is just a fragment of a process that goes far beyond it in terms of both time and subject matter. Here it opens new possible becomings that were mere conjectures until it was written; it is a line with relative autonomy running parallel to the other relatively autonomous part-projects and establishing fruitful exchanges among them, which in turn become an opportunity for new projects.

through this process, and specially the publishing of this book, we want to contribute to the existence of new spaces of social and technological hybridisations that, by forging new paths, continually (re)invent world(s).